Skip to content
Home > Blog > Around the World > Spain: Does learning some Spanish grammar help you to get some bread?

This is a true story that Mohamad Al Karbi  has kindly invited me to write in his renowned “Around the World” weblog.

It’s the story of one of my first Spanish language experiences in Spain and it still makes me smile after all these years!

I know, I really do know. how it feels when you have to actually use your new language for the first time with native speakers of that language!

It’s a crazy feeling but I’ll never forget the euphoria I felt many years ago when I went into my first ever shop in Spain.

I wanted some ‘pan’ (bread), so logically the shop was  a ‘panadería’ (bread shop). You would have thought that would have been easy, right?

I thought that too, because I was so qualified…or  so I thought!

I had fallen in love with Spanish at thirteen years old . (See previous post : Falling in love .)

As a young lass from the north of England I had gained an “O-Level” in Spanish at sixteen, then an “A-Level” at eighteen and was in my third year of a four year degree course in Spanish and Politics at the time. This was the year when language students were sent off on a language exchange programme, to practise their new language. I had just arrived in Bilbao in the north of Spain, ready to start a year’s course at the Deusto University in Bilbao.

All exciting stuff in those days for a poor lass from the north-east of England who had never been further south than Doncaster in her life.

This made me twenty years old. (That’s a long time ago now!) And I had been learning Spanish grammar for a long while.

Getting some bread should have been easy, yes?

I had lurked around outside the shop, self-consciously, for at least twenty minutes, trying to look nonchalant, inconspicuous, as though I wasn’t really intending to go in; as though I was waiting for someone, perhaps.

‘Nervous’ wasn’t the word. Old Spanish ladies were going in empty-handed and coming out with bread of all shapes and sizes so I knew I was in the right place!

Only one problem: I was petrified.

Would the lady understand me?

Would she think I was stupid?

Would she just laugh at my terrible accent?

What about the other women in the shop?

Would they know I was ‘different’?

What if she said something back to me?

Would I be able to actually get any bread?

As the clock ticked on, I  realised closing time was drawing near and I knew I had to either just walk into the shop  and face the embarrassment or go without my sandwich. (I was a big girl in those days and I needed plenty of ‘pan’ to fill me up.)

My hands began to perspire and I could feel my heart palpitating. I can remember, to this day, exactly how bad that all felt.

What exactly was I going to say?

The sorts of things you say in a bread shop such as:

“Could I have that loaf of bread, please?

“Do you have any white sliced bread, please?

“Can I just have a small loaf, please?”

“Excuse me, but do you think it would be possible to purchase some of that delicious-looking bread you have over there in that basket?

Even if the ‘panadera’ (bread lady) spoke some English, she most likely wouldn’t understand all of that ‘convoluting’ English, which certainly wasn’t necessary in this situation.

I knew what I wanted to say…in English, but where to start with all that in Spanish?

If I had had a piece of paper and a pen, I could easily have written all of those clever sentences out in Spanish, with all the grammar I had learned in my school days.

It is amazing to think I had been learning Spanish for seven years at school and university yet was completely at a blank when presented with a real-life situation.

Hours and hours of homework exercises meant I could WRITE very well in Spanish; but always alone, with a good dictionary beside me and plenty of time to do it in.

For Goodness’ sake! I had read “Don Quijote” and had done critiques on Spanish poetry of the nineteenth century in the first two years at college. Spanish literature was my best subject at college!

All of that ‘training’ had not prepared me to get a slice of bread! My mind was blank.

It was now approaching closing time. The ‘panadera’ lady came to the door to start closing up. She saw me and politely smiled but then ignored me.

Before she actually drew the metallic shutter down over the doors,  I uttered the most basic sentence of all sentences; the only words that came to my mind in that mad moment of panic. It was now or never.

Nothing could have been more simple, especially after seven years of studying Spanish and Spanish grammar.

She dragged me into the shop beaming, gave me a random bread stick from the back shelf, told me a number that I didn’t quite catch, so I had no choice but to  hand her a one hundred peseta note (a ludicrously large amount for such a small bread stick).

She then proceeded to carefully count out the also ludicrous amount of small change in pesetas. (Thank goodness it was at the end of the day and  I was certainly her last customer.)

I did it! I had it! My little ‘baby’ sentence had worked and I had actually had been able to achieve something great, even though very small.

In language terms, for me there’s nothing more satisfying than to know you have been able to communicate with ‘the other side’ even if it is a simple communication. 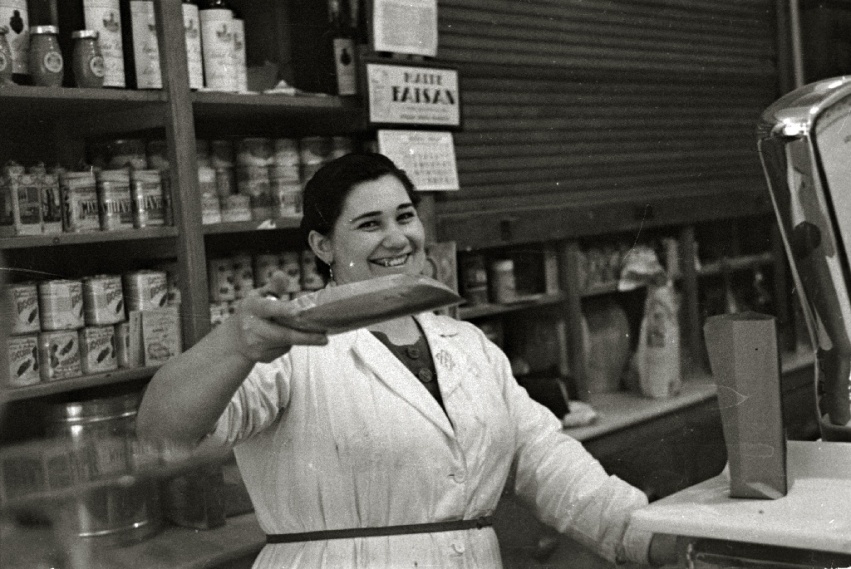 (Not the same lady, but exactly how it happened! photo credit)

I’ll never forget the euphoria I felt all those  years ago when I walked out of my first ever shop in Spain.  I had wanted some ‘pan’ (bread), and all that matters is that I got my sandwich in the end.

If you enjoyed this article and would like to read more about language learning and learning Spanish in particular, you can visit:

I would love to know if anyone else has  had a similar experience in their language learning history?

Please leave any comments below, or any questions about Spanish grammar or culture that I will answer to the best of my ability.

49 thoughts on “Spain: Does learning some Spanish grammar help you to get some bread?”