it is an honor to be read by you this fine day. A big “thank you” goes to the owner of this site – Mohamad, who was gracious enough to invite me to write a guest post. My blog mainly consists of news related opinion pieces and creative writing, so I thought this post would be a nice change of scenery. Without further ado, I invite you to take a journey with me to Tunisia, a country which I visited over a decade ago, but still remember fondly.

As an avid traveler, from an early age, my goal was to visit at least one country on every continent. So when it came time for another family vacation, I knew that I wanted to make Africa my next destination. Everyone was always raving about Egypt, and while I wouldn’t mind going there, I felt like doing something else. Something nobody that I knew even talked about. This is how Tunisia became our destination. Let me tell you right away – the culture shock was real. But let me start from the beginning.

Tunisia actually takes its name from its capital – Tunis (not the other way round). The origin of this name is uncertain. Some say it comes from a Berber language and means something like “a stop”, or a “night camp”. Others claim it was named after Tanit, a regional goddess of war, a virgin mother, and a symbol of fertility. Tunisia is bordered by Algeria, Libya and the Mediterranean Sea. This relatively small country has the Atlas Mountains, as well as the Sahara desert as part of its territory. (Fun fact: parts of today’s Algeria, Libya and Tunisia were once called Ifriqiya (or Africa), which then led to the whole continent being called that.)

Since it was an organized trip (travel agency, vs. self planned), we flew in to Tunis, and then got on a shuttle bus with other tourists. As we drove South, we periodically stopped to unload some of our fellow travelers. Our destination was Sousse, which has been recognized by UNESCO as a World Heritage Site due to its architecture. The first thing that shocked me was a picture of a man (sometimes with a Tunisian flag in the background), which hang in the hotel’s lobby and pretty much every store we went to. You could also see those outside, on various posters. It turned out to be a Tunisian president – Zine El Abidine Ben Ali. (example below) 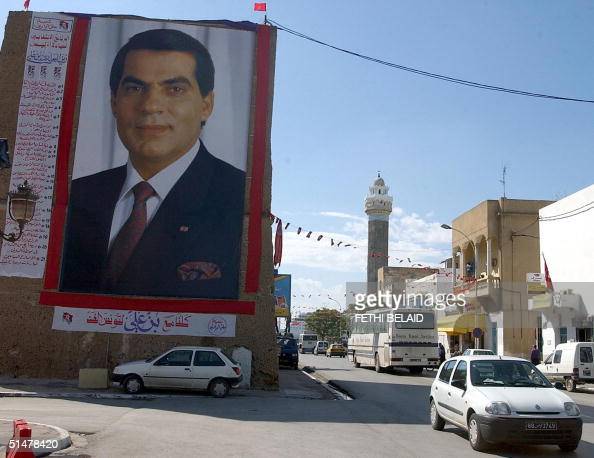 Our resort provided great entertainment all day long (ex.: various aerobic classes by the sea) until the late hours of the night (ex.: men walking on broken glass, laying on  boards full of nails, etc.) But aside from relaxing on the beach, we also ventured outside the resort. First of all, the streets were chaotic. No traffic lights, no stop signs, nothing I was used to. Drivers just scream and curse at one another. Driving there surely seemed like an extreme sport, so we opted to walk wherever we could. If you choose to take a taxi, remember to pre-negotiate the cab fair, because some drivers take advantage of the unaware tourists and charge them a lot more than they normally would.

To this day, I’m not sure how we didn’t get lost in the Medina. It really can be a maze if you don’t keep track of your surroundings. The narrow streets are filled with buckets and buckets of spices , fruits and Arabic wear. The sellers were all so nice. Always trying to chat with you, say a few words in your language and ask you for some fun facts about your country. They are very charming and charismatic, and make it sound like the deal you just “negotiated” was just for you. A steal. You part ways feeling like you just made a friend. I even learned how to weave a homemade rug by hand.

We could not stop but marvel at the Ribat, which is a fortified holy site, and we even ended up climbing its tower to take in the view.

The building which served dual purposes (defense against assailants + spiritual retreat) is in great shape. Especially when you realize it was built in the 8th century. The Ribat contains a minaret, which is thought to be the reason why there is not one in the Great Mosque. These two buildings are very close to one another. (The second picture above is a view of the Mosque from the Ribat.)

The Great Mosque of Sousse (built in the 9th century) was really interesting to see. There really aren’t any decorations inside (Fatimid and Zirid architecture) or outside, aside from chandeliers. Just a lot of beautiful arches and some columns. There is a place for shoes at the entrance, there are reed mats on the floors, and there is a wooden divide to separate the females from the males in their place of worship. 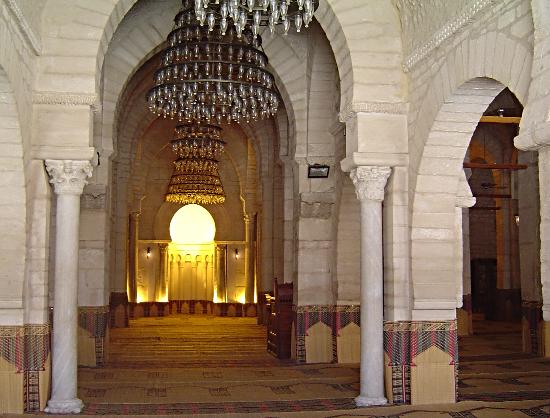 One of the places we went to for dinner was the Saloon, which is a popular western steakhouse and pub, and the outside reminded me of Arizona. The food was delicious.

This is it for today. Let me know in the comments if you’ve even been to those sites and if you ever thought of going.

P.S. Their coffee is strooooooong.

P.S. None of the pictures in this post belong to me.

Please feel free to check out my site and say hello!

Tell us about your blog
Guest Blogging Opportunity