Hello great ones. I am Stacy. I would like to take this opportunity to thank Mohamad Al Karbi for his invitation to write a guest post on his blog. It is a pleasure to share with you what I enjoy most. Mohamad is a great supporter and lover of Tech which makes us share some common interest. Welcome as we delve into the tech world. Have some of your 3D glasses on as we take a little tour in an amazing field.

Well, well, well, in this day and age, where all sought of things are happening in the world, corruption, lack of healthcare, war, terrorism name it all. The list is endless. We can never anticipate what will happen next or what invention will pop-up overnight.

With the invention of Artificial Intelligence, an integration between machine learning and deep learning, it has taken control of major industries. From the technology industry, Science and Engineering industries.  Recently, we had Google AI’s creating their own AI’s (unbelievable it is, but it did happen, robots created other robots). AI, has been called the next future. True to that, it is the next future of technology as it solves what man cannot do in minutes.

AI’s are proving to take over human’s capability and functions. They are surpassing what any ordinary human being can do. Their evolution is great but comes with its own disadvantages, including loss of employment as recently experienced by companies such as Sound Cloud and Microsoft which laid off many of their employees, recently.

The AI’s have imitated most of man’s actions and behavior’s and this includes talking, teaching, and some go to the extent of imitating emotions. Recently, a robot “thought to itself” if I may say so, why can’t it go a step further and imitate the humans by committing suicide. This I can call as “The Robotic Suicide Mission.” (Very weird, right?) 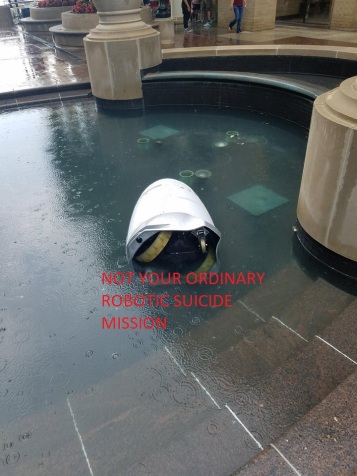 This robot, that decided to experiment with suicide was employed as a security robot at a Communications Agency in Washington DC. The robots are equipped with cameras to provide a more physical experience than your regular security (CCTV) camera.  According to the company marketers, they state that the robot is much better than human guards. They attest this to some of the features that the security robot has such as:

The K5 robot drove itself and into pool drowning which has led to its death. The robot has also had other misfortunes previously including, running over a 16-month-old toddler and hit the child’s head and the child fell but the robot continued to still hit the child, leaving the child with injuries on the leg and foot.

This comes a day after one of the people behind Artificial Intelligence, Elon Musk, came out and spoke out at the US National Governs Association meeting, about how AI could be a threat to human civilization where the AI’s will come to harm humans. He stated that he was referring to Artificial General Intelligence and not your used to AI’s such as Siri and Cortana. His statements, currently cannot be believed by many but some of truth in it can already be seen from the security robot and from a recently created Inspirobot that went crazy when it decided to generate weird and crazy posters instead of motivational posters.

We can speculate and say that the robot took this drastic measure trying to imitate humans as they say, the world has become a terrible place to live in. But ideally, this is not the right act for any human or robot. Speak out to others and let others hear and help you out in difficult situations. A time is coming when robots will take over and human beings may lose control resulting in many dangers to humans.

I am a Kenyan girl who fell in love with the kitchen and turned to become a Food Blogger. A food enthusiast at heart and I love experimenting different meals and ingredients in the kitchen. To see all my recipes, check them out on my website at https://www.holahme.com