Locals call it the “Wet Sahara”, a bronze expanse of muddy sands stretching as far as the eye can see, snaking into spiral patterns, light dancing off scattered pools; overhung by a sky straight from a William Blake painting – perpendicular shafts of silver breaking from between the pregnant clouds.

I’m on top of Hampsfell, a small hill in the north-west of England overlooking Morecambe Bay; a place of desolate beauty and treacherous tides, which roll in faster than a horse can gallop then retreat beyond the horizon leaving a perilous maze of ever-shifting quicksands.

When Mohamad generously invited me to contribute to his Around The World series, I was honoured. I’d been following it with interest, reading fascinating articles about Cornville, Maine; Launceston, Tasmania; Kingston, Jamaica, and much closer to home, Newcastle, England. But I scratched my head as to how to approach this.

Here, in the county of Cumbria, at the southern end of The Lake District National Park, things are very rural. The nearest big city, Manchester, is 80 or so miles to the south. The National Park is home to many more sheep than people. We do have several small towns and many picturesque villages, famous for their pubs, cafes and restaurants, but what really draws people to the Lake District and succeeds in attracting over 17 million visitors a year, is the landscape itself. 500 million years of geological processes have forged a strikingly beautiful terrain of lakes, dramatic valleys and wild, rugged mountains, which fan out like the spokes of a wheel.

Our mountains are small compared with those of other countries, even those over the border in Scotland, but their sweeping vistas, rocky outcrops and challenging ridges allow walkers like me to traverse a whole gamut of dramatic scenery in the space of a single day.

Hampsfell is three miles from my home. As far as Lakeland hills go, it’s a small outlier. It has its treasures though, not least the rare limestone pavements that jut from the summit like ancient fortifications. But its crowning glories are the views it offers in all directions; to the south is the Bay and to the north and west is a splendid procession of Lakeland hills – so why don’t I take you on a whistle stop tour of the peaks I can see from here?

Limestone pavements on top of Hampsfell

In Cumbria, we call hills “fells” and small mountain lakes, “tarns”. Remember those names – you’ll need them to make sense of what follows.

Dominating the skyline to the north-west are the Coniston Fells. These mineral-rich mountains were mined extensively for copper in past centuries and later quarried for slate.   In their heyday, the copper produced here was used to make coins, weaponry and even to clad the hulls of the naval fleet. Today, nature is slowly reclaiming the old workings, lending an eerie lost-world air to the valley.

Crowds trudge up through a disused quarry to the summit of the Old Man of Coniston (the range’s highest summit), but take the lesser trodden path along the ridge to reap even greater rewards. Just south of the Old Man, lies Dow Crag – one of the finest rock faces in the Lake District, its imposing buttresses and plunging gullies reflecting in the copper-green tarn of Goats Water. As you stand on its northern shore and gaze across at the formidable cliff, you’d swear there’s no direct way up without ropes and climbing gear. But if you’ve a head for heights and a taste for adventure, then cross the tarn outflow and climb the scree slope that rises steeply from the southern shore to the foot of the crags. Bear left by the mountain rescue stretcher box and scramble up the South Rake, a loose scree gully that cuts diagonally across the rock face. Keep your nerve as the gradient steepens and successive hand and footholds give way before your grasp, a little careful exploration yields safe passage and the before you know it, you’ll be sitting on the summit exhilarated. 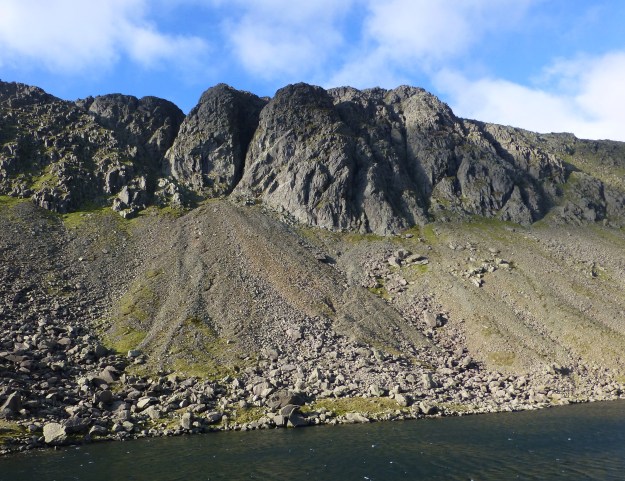 Head north to Great Carrs and the remains of a Halifax Bomber that tragically crashed into the mountain in 1944, while on a training mission. The undercarriage has been turned into a memorial to her crew. A plaque commemorates their names and a simple wooden cross stands forlorn against a skyline of rugged grandeur, backdropped by England’s two highest summits, Sca Fell and Scafell Pike; these rugged peaks stand like giant stone beasts squaring up to each other across the narrow ridge of Mickledore.

Follow the Coniston ridge north to the summits of Swirl How and Wetherlam then cast your eyes east to the long blue expanse of Coniston Water, where Donald Campbell set four world water speed records between 1955 and 1964 in his boat, Bluebird. It was here too that he made his final, fatal attempt to reach 300mph in 1967.

To the west are magnificent views of the neighbouring mountains, Bow Fell and the Langdale Pikes. In the 1960’s, Alfred Wainwright penned a series of Pictorial Guides to the Lake District, documenting the 214 highest hills. These books became best-sellers and opened up this landscape up to millions of people. Wainwright declares “No mountain profile in Lakeland arrests and excites the attention more than that of the Langdale Pikes”. They impart an air of imposing grandeur by sweeping up in a steep unbroken line from the valley floor to their lofty summits, the Pike O’Stickle tapering to a perfect conical peak from which its southern scree slope sweeps down to form what Wainwright calls “that steep ladder to heaven”.

The conical peak of the Pike O’ Stickle

In Neolithic times, this scree slope provided the inhabitants of the valley with hard volcanic stones they could shape and polish into highly effective axe heads. These tools would have been invaluable in clearing woodland and assisting the transition from hunter gatherer to farmer. Archeologists believe they may have had a symbolic value too, signs of wealth or status perhaps. They may even have had mystical significance. Indeed prehistoric axe heads forged here have been found all over the British Isles.

Bow Fell dominates the valley. When you stand on its summit, it feels like the centre of the world. Everything seems to converge here. The image of the spokes of a wheel makes immediate sense – the valleys of Duddon, Eskdale, Langstrath and Langdale radiate out from its base and the major mountain ranges seem to curve in to link arms. Geographically, the real hub is about 14 miles away near Dunmail Raise, a large cairn, or pile of stones, which sits somewhat incongruously on the central reservation of a dual carriageway. According to legend, it marks the grave of Dunmail, last king of Cumbria, slain in a bloody battle with the massed forces of the Saxons and the Scots. 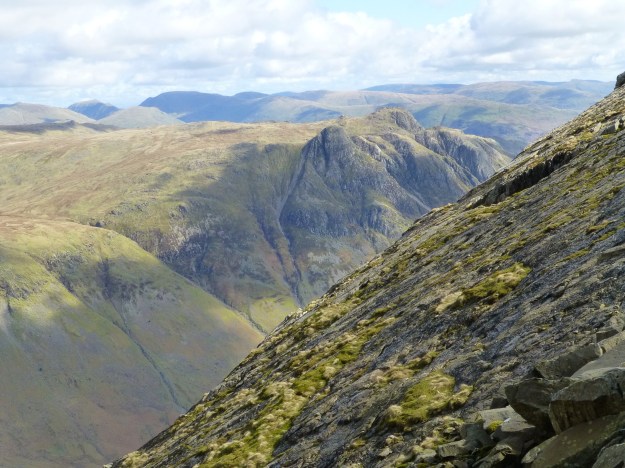 The Langdale Pikes from Bow Fell

Dunmail’s vanquished soldiers rescued his crown, which they believed to have magical powers, and flung it into depths of Grisedale Tarn to prevent it from falling into enemy hands. Every year his ghost army is supposed to return, retrieve the crown and march to Dunmail Raise to see if their leader is ready to rise again and reclaim his kingdom. 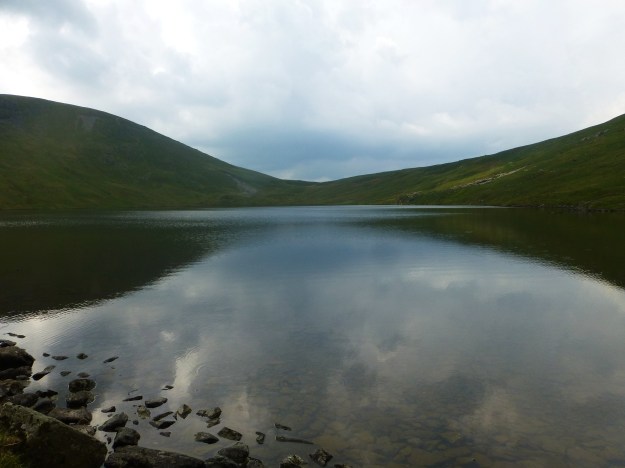 From Grisedale Tarn you can climb over Dollywagon Pike and Nethermost Pike to the heady heights of Helvellyn; or, if the idea of the South Rake fired your blood, ascend from Patterdale instead and brave the knife edge ridge of Striding Edge.  At the top of this exhilarating arête stands a monument to Charles Gough, a romantic artist who was immortalised by the likes of Wordsworth and Sir Walter Scott for the recklessly romantic nature of his death and the apparent devotion of his dog, Foxie. In 1805, Gough set out to climb Helvellyn with no experience and only Foxie for company. He was found dead three months later by a shepherd who supposed he must have fallen from Striding Edge. Foxie was still guarding his body. The Romantic poets reveled in this picture of canine fidelity, but a local newspaper had a more prosaic interpretation, suggesting the dog had survived by eating her master to “a near perfect skeleton”.

These stories are brief episodes in an unfathomably long continuum. Gough, Dunmail, the wrecked plane, the copper mines, the Neolithic axe makers, indeed the entire length and breadth of human history all amount to one tiny blip on the colossal time-line of this beautiful landscape. The product of catastrophic eruptions, these hills stood for hundreds of thousands of years before there were people to climb them and will remain long after the last walking boot has crumbled into the dust. It’s a realisation at once humbling and liberating. Perhaps this is their enduring appeal. I’ll leave the last word to Wainwright, who asked the question, “why do men climb mountains” and came to the following conclusion:

“They find something in these wild places that can be found nowhere else. It may be solace for some, satisfaction for others: the joy of exercising muscles that modern ways of living have cramped, perhaps; or a balm for jangled nerves in the solitude and silence of the peaks; or escape from the clamour and tumult of everyday existence. It may have something to do with man’s subconscious search for beauty, growing keener as so much in the world grows uglier. It may be a need to re-adjust his sights, to get out of his narrow groove and climb above it to see wider horizons and truer perspectives.”

Thanks again to Mohamad for giving me this opportunity and thank you for reading.  If you’ve enjoyed what you’ve read, you can find more stories from the fells on my blog:

46 thoughts on “A Whistle Stop Tour Of The Lakeland Fells”